Serious penalties apply to offences endangering life and there are a range of possible defenses. Endangering life cases can be very complex. If you have been charged, you should get legal advice from us about your options, any available defence or likely penalty. Book an appointment now.

Choking, suffocation or strangulation in a domestic setting s 315A

The law provides that a person commits a crime if: – 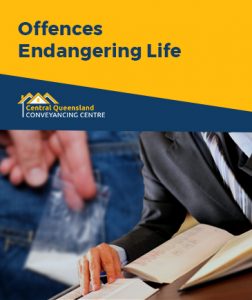 What constitutes as a domestic relationship and associated domestic violence?

What the prosecution needs to prove

The choking, suffocation or strangulation was associated domestic violence under the Domestic and Family Violence Protection Act 2012.

Accessory after the fact to murder s 307